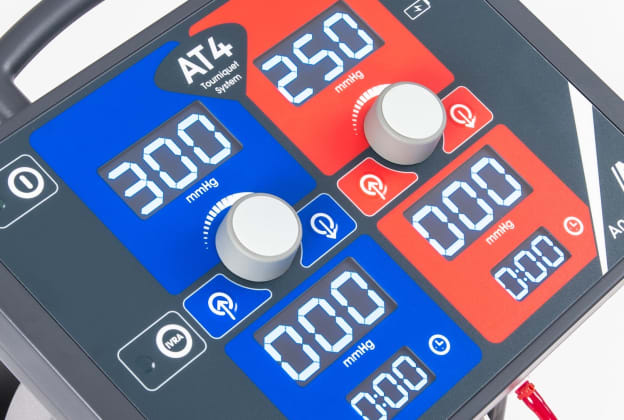 Over half a million patients in the UK are waiting for trauma and orthopaedic procedures, including upper and lower limb surgery – over 42,900 more than in 2019 – almost 35,000 have been on the waiting list for longer than 12 months.

A proportion of these will require the use of a tourniquet.

With efficiency in operating departments being key in the drive to reduce surgical waiting lists, time consuming set-up and / or air source reliant tourniquet inflation units may be detrimental to its success.

Traditionally a tourniquet inflation device is supplied to run from medical air – commonly referred to as a pneumatic tourniquet.

This means that the device has to be positioned during surgery within the vicinity of the pendant to run from its medical air supply, either the 4 or 7 bar (MA4 or MA7) piped air service.

With other medical devices also relying on the same pendant, the same air service, this can lead to a lack of sufficient outlets and a need for an outlet splitter (commonly referred to as a “Y” connector) or it may be that the device has been supplied with a bar specific male probe and all of those outlets are taken up for use by other devices (i.e. all the 4 bar outlets are taken and the device is fitted with a 4 bar male probe to its medical air supply hose).

Due to the British Standards in place for air supply probe connections, all have to be bar specific and cannot be supplied as a universal fit.

Leading to the device having to fight for its place and creating demands to cater for it at times.

This also means that it limits the areas in which a pneumatic tourniquet can be used – there has to be a medical air supply within the vicinity and it has to have an outlet to match the devices bar specific male probe.

But, this solution comes with its own shortfalls. A pneumatic tourniquet has to be – due to the British Standard on tourniquets in place – self-compensating. Which means that, even when not in use, if the medical air hose is connected to the cylinder mounting outlet and the medical air cylinder is open, air is being drawn into the unit and released to atmosphere within the device casing – resulting in the risk of the air cylinder being empty when the device is next in need of being used.

These devices were manufactured with their own internal compressor and were powered from AC mains, possibly with a battery as a back-up power source.

Primarily available in the United States and Europe, they became more prevalent within UK healthcare during the mid to late 1990’s and have increased in their popularity throughout the 2000’s.

Whilst these devices offered a solution to the medical air supply issue, the majority were still reliant on a source of power, switching air for electricity and a similar issue remained – the device needed a mains socket, as do other medical devices and its position had to remain within the vicinity of the pendant still fighting for a place and creating a demand.

In 2012, having taken over 40 years of experience and first-hand feedback from tourniquet users into the development project, a new electronic tourniquet was placed on the market.

This tourniquet offered something the majority before it had not - complete independence.

It has a rechargeable battery, which isn’t there as back-up, its there to power the device whilst in use.

Its there to power the device all day, it can power back-to-back 30-minute procedures – with both channels inflated to 300mmHg – for 17.5* hours before needing to be charged.

With a fully charged battery* the device can be used anywhere, all day, without needing to be close to an air supply or a mains socket and can take up a more convenient position in an operating theatre.

*Based on a well-maintained manufacturer approved battery

Not only that, it has an internal air reservoir that feeds the tourniquet cuff adequately, resulting in the internal compressor only running for short periods – reducing its impact on noise levels within the operating theatre – whilst also offering large, easily visible OLED displays, colour-coded single or independently working bi-lateral channel operation, an IVRA (Bier’s block) safety guidance feature, self-calibration, self-diagnostic routines, precision controlled pressure regulation and visual and audible warnings and alarms.

Its design has been centred on usability, leading it to be both simple and intuitive to use with a minimal amount of time required during set-up for a procedure.

This tourniquet has also been designed, manufactured and is supported by a UK based company.

Over the 9-year period it has been in existence, an AT4™ Electronic Tourniquet will have been used millions of times and can only be considered to be safe, effective and proven.

For more details on Anetic Aid's AT4™ Electronic Tourniquet System, click here. Alternatively, please contact us here and we'll get back to you!